Rejected by the Illusionist

Wow….so not sure what to think of this one! 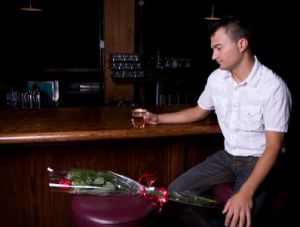 Finally got going last night…headed to the place, found it without getting lost (YAY!), and met Mr. PhD.  Yeah, I was about two hours later than I had agreed to meet(you <blush>  know exactly what I was doing), but I did let him know I was going to be later than expected.  He was going with friends anyway, so I don’t feel this was totally rude.    It’s not as if he was sitting alone at a dinner table for two or waiting on a bar stool alone, looking like the proverbial guy who got stood up!

I’m looking all around for him…. A tall (looking about 6’ or maybe taller even in his pictures), dark haired, attractive, professional-looking man.  Finally he finds me…

What??  As he comes toward me, I’m thinking, “Is that him?  (squinting my eyes a little)…Hmmm….objects in sight must appear smaller than they really are” because he was shorter than I.  I’m nearly 5’8” and I’d swear he was 5’7” or maybe a half an inch taller than that, but certainly not “tall” by any standards!

Now, he never actually said he was tall or the height I thought.  Those were my guesses assumptions based on his photos and I really have to wonder just how that kind of height-“appearance” was fabricated so well in a photo?!  What kind of lens does his camera have that actually makes someone my height appear over 6 foot?   He must be a magician because that’s a fabulously executed optical illusion he has going on in those pictures!!  I’m not implying that he was dishonest.  He wasn’t.  Okay wait….  I just double-checked his profile and he does, in fact, list his height as 5’10”.   Yup…he was dishonest.  Not that 5’10” is claiming the height I imagined him to be from his pictures, but there’s no way in hell this guy’s even fully hitting 5’8”…  And I’d know this because I know exactly how tall I am and he was my height, at best…

I do try not to discriminate on height.  I mean, it is what it is and this isn’t something any of us can dictate for ourselves like big muscles or big hair.  Some of the greatest guys I’ve known were around my height.  However, I am a tall-ish girl.  And while I’ve never been into the pretty boys,  overly-done Ken-types, or even have a huge insistence on a certain level of looks (I really do strongly consider the personality qualities of a person and that factors in BIG on how attractive I find them), I do have a height requirement.  Right or wrong, good or bad, I just do.  It’s probably the only physical appearance-trait which I lean toward being somewhat inflexible.  A guy doesn’t have to be a Greek God of physical perfection to me…  he doesn’t have to have a fantastic physique…he doesn’t have to be considered drop-dead-gorgeous by any standards of the definition. He can carry some extra pounds, be a little skinny, have a big nose, or too-tiny lips, whatever…   He does, however, have to be at least slightly taller than me.  It’s my only physical trait deal-breaker and I’ve just learned to accept that that’s where my teeny bit of possibly shallow side rears its ugly head.

Was this the trick he used?

So, needless to say, I wasn’t overly impressed upon meeting him, as he wasn’t at all what he implied or appeared to be in his pictures, although he was attractive(even in spite of the Affliction shirt he was sporting – uhh….just not my kind of “look” on a guy really).  Anyway, I made it right at the end of the concert (sorry…I was lollygagging and mustering up the desire to go out at all).  He introduced me to his friend and we stood there for the last two songs and made a few little attempts at conversation in spite of the noise.  Not impressive conversationally either, but I was giving him this one since conversation under these circumstances was difficult and would be for anyone.

The three of us start walking out of the concert and it’s pretty quiet among us.  I mentioned that I’d seen a local band a few weeks ago who was really fun, asking him if he’d ever seen them.  He said he had a long time ago and then asked me who I went to that with.  I told the truth:  Iwent with another person from the dating site that I’d met him on.  (Should I have been less than forthright about this?) …And that was pretty much the end of all conversation until as we got to the exit doors, he says he’s parked in the garage and asks where I am parked.  I’m in the lot.  So he says, well I’m going home.  I’m tired… I’ve been up since 7 and worked all day, but I’d like to hang out with you again sometime.

I realize I was quite late, but what the heck is this?  We aren’t even going to sit down somewhere together and chat?  Don’t get me wrong, I’m already pretty certain I’m not interested in dating him, so it’s not about that…  I just can’t imagine bothering with meeting up with someone at all if you’re not going to actually spend even a few minutes chatting one-on-one…  I mean we’re already there, right?

I suppose this guy must have not been at all enthused about my appearance either, as I can honestly say this was the shortest “date” I’ve ever experienced!  And in spite of the fact that I wasn’t really attracted to him “like that”, no one has ever…and I mean ever…dismissed me so quickly and easily, and especially not after I actually made the effort to go and meet the guy!!  Well, my pride was wounded by this.  He asked if I wanted him to walk me to my car…  No, I really am fine on my own…after all, I entered all on my own.  And he went one way and I the other.

I couldn’t help but feeling I was a total disappointment.  What?  Do I not look like my pictures?  Most people I’ve met like this say almost instantly, “Ahhh you’re even more attractive in person!”  Is this just a line to mask their massive disappointment?  I’ve never questioned this before, but this was a first for me…and really felt awkward!! ..and not in a good way.  I suppose I should just be grateful that he dismissed me so quickly since I wasn’t interested in a dating-thing with him at all, but I still would have taken a few minutes to just kind of get to know him and see if we had any friendship-possibilities!  Was it disappointment in me?  Or was my being two hours late just so rude and totally unacceptable to him even under these “casually meeting up” circumstances?  What????!!

I drove home feeling very lonely, rejected, and wondering all sorts of things…  Of course I have selected pictures to post that I like the best…?  Well, and one just ridiculously stupid picture to openly demonstrate my (truly goofy and nerdy) personality and not necessarily my “most flattering” look…  Did I appear shorter to him in my pictures or something?   And maybe he was equally as disappointed in my height?

Wow…what was this about?

Anyway, so I’m on my way home feeling just crappy and like the whole thing was just a huge waste of time really… and I decide to stop in at a cute little neighborhood bar just down the street from my house to cry in my drink, wallow in my self-questioning…to try to salvage something of my Friday night.  I have never gone to a bar all by myself, so this was an experience in itself!

Suffice to say, the evening did turn out to be interesting after all…more to come on that…

Posted in Dating, First dates, image distortion, No way in HELL I am going out with you!, Online Dating, ponderings, rejection, self-reflection, total flop, WTF?!